Collin Morikawa's teacher did everything right 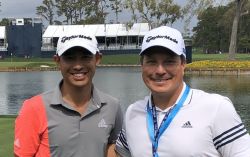 Rick Sessinghaus has been Collin Morikawa's teacher and mentor since he was eight years old. Collin now is 23 years old and ranked the fifth best player in the world along with a major championship win. Collin deserves the majority of the credit for his success, but his parents and his golf coach have helped shape and guide his rise to the very top of professional golf. It is a tricky proposition to direct a young person in his or her pursuit of excellence is any endeavor. Rick definitely succeeded.

I met Rick Sessinghaus about fifteen years ago. My partner recruited Rick to teach for VIP Golf Academy and setup a Los Angeles location for our golf school. Rick, at the time, had an indoor facility with video and all the gadgets for golf instruction and availability to do on-course lessons at a wonderful 9 hole course in Glendale called Chevy Chase Country Club. I had the opportunity to meet with him and tour his facility. I was very impressed with his enthusiasm and expertise in wanting to be on the cutting edge of technology and innovative teaching. Unfortunately, VIP didn't attract many students to the LA school, so our partnership only lasted a couple of years. But the students that did attend a Sessinghaus golf school gave excellent reviews.

Collin Morikawa was drawn to golf at age five. His parents encouraged his enjoyment of golf and at eight years old they felt he would benefit from professional instruction. They entrusted their son's golfing future to Rick. It must have been a match made in heaven, because you couldn't ask for a better outcome. Rick's goal with Collin was not to make him the next Tiger Woods, but to improve his golf game and enjoyment. Collin was enthusiastic, hardworking, and a sponge absorbing Rick's teaching. First the goal was to be a good junior golfer, with his steady improvement; he became one of the best junior golfers in California. He was awarded and played four years for Cal Berkeley. His sights were adjusted at each step to reach a higher plateau. Not satisfied to be an average college golfer, Rick and he worked to make him an All-American. He achieved that goal and rose to be ranked the number one amateur golfer in the world. Next was the big leap to play professional golf against the "big" boys. All the drills and mental preparation from years of training made him ready for his biggest challenge. He passed his first professional test in winning a PGA Tour event in only his sixth start.

Unfortunately, I witnessed the destruction of a potentially very good junior golfer. In Scottsdale at VIP Golf Academy, we had a three day golf school with two young boys from Canada. I taught the youngest, who was 11, and a novice to the game. His older brother was 16 and had had success winning a few tournaments in his area. His parents wanted him to improve with better instruction. His teacher at VIP did a great job in the three days bettering his swing and greatly improving his short game. Each day the four of us would have lunch together and his excitement was overwhelming. His final nine hole playing lesson resulted in a two under par round. He said he learned so much and never hit it better and finally had an understanding and a reliable golf swing that he could trust. On the final day we learned that in a week his parents had signed him up for a five day session with a top ten teacher in the world in California. It's not good to mix different teaching styles and different teachers, but his parents only wanted the best for their son, so they paid a lot of money for this "expert" instruction. Two weeks later I received a call from his father wanting me to call his son who was crying on the driving range in Canada. He couldn't take the club back, because he was so conflicted. He told me the following week was a total disaster and that this expert teacher had changed everything and made him do it his way or not at all. By the end of the week, he was a basket case and couldn't break 50 for nine holes. I got him to think back to the good feeling and swing thoughts that he learned before going to California. I offered for him to come back for free and we would get his game and mind back so he could enjoy the game again. Unfortunately that didn't happen. I talked with him and his dad a few more times and there was improvement, but he never recovered from the trauma of what I consider the worst golf lesson and mentoring ever. I eventually lost touch, but I tried to see if he played in any junior tournaments that summer. He didn't. All that excitement and enthusiasm gone to waste by the wrong kind of teaching. It was so sad.

Rick obviously has pressed the right buttons for Collin to learn and succeed. It's a tricky situation and requires good judgement and knowledge. Rick is not only a PGA golf professional, but holds a Bachelor's degree in Speech Communications, and a Masters and Doctorate degree in Applied Sports Psychology. Few juniors could ask for a better combination. Rick also had an outstanding young individual who clearly has his life and priorities straight. His humbleness and genuineness shines through in every interview that he gives. That's a reflection of a good upbringing. It is refreshing to see a nice person like this succeed and the hard work of those that helped him to this pinnacle also get credit.