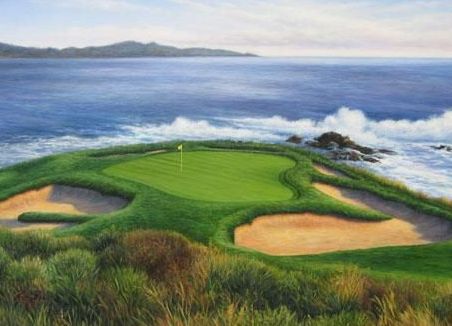 Of all the courses that have hosted a major championship, Pebble Beach is the one course that I have played the most. My guess is that I've played it around 20 times. When I was an amateur, the California State Amateur was always played at Pebble in June. Qualifying for the 32 spots in the match play championship flight was held at Pebble and Cypress Point. I didn't know at the time how lucky I was to be able to play Pebble Beach and Cypress Point. Cypress is still my favorite golf course of all the over 1,000 golf courses that I have played in my life.

I was seventeen the first time that I played in the California State Amateur. John Richardson took me and his son, Kemp there in 1963. After checking into our hotel, Mr. Richardson took us out to see the 16th hole at Cypress Point. It was getting dark and foggy as we first walked to the 15th tee at Cypress. At first I thought this was the famous 16th, but it was only about a 150 yard par three that also carried water. It was a gorgeous hole. We walked around the green and then went to the tee of 16th. It was so foggy that the green was not visible except for the cliff in front of the green. Mr. Richardson pointed to where the green was located. To me it was as far away as Japan. How could you hit a ball that far! He then pointed at a tree 50 yards to the left and said that is how you play this hole. You hit four iron to the left of the tree and wedge on from there. It is a par three, but four is a good score. In the dark and fog, it looked even longer than a 160 yard carry to the layup zone. I always heeded Mr. Richardson's advice and played to the left and made my four and went on. I did go for the green once in a North/South match and was successful. The hole is listed at 222 yards, but wind and sea make it play a lot longer. Seeing that hole for the first time in the twilight and fog made that whole experience even more memorable and mystical.

I was lucky to grow up and learn to play golf in southern California. In Long Beach, I was surrounded by fantastic players and juniors that would accomplish great things in golf. That will be a blog for later. John Richardson and his son Kemp were only two of the great players that I grew up with. Mr. Richardson would take Kemp and me to Long Beach State College and hit golf balls on the school's golf practice field. You hit your own balls and then went and picked them up yourself. If I didn't get a ride to Long Beach State College, I would ride my bike the five miles with golf bag and shag bag of a 100 balls at least three days a week and hit balls until dark. It got easier when I could drive, but the routine was the same. It never seemed like work, it was fun to hit the ball and strive to get better. Mr. Richardson won the 1961 California State Amateur. His ball striking was outstanding. The sound that he made with his irons and woods were so different from everyone else. It was loud crash and then a rocket would launch the ball in a low trajectory. It was the sound and trajectory that both Kemp and I tried to emulate. For the most part, we both did a pretty good job of copying the master.

Besides winning the California State Amateur, John Richardson won the USGA Senior Championship at age 66, after finishing runner-up eleven years earlier. He won many other titles, including the Southern California Amateur. I was lucky to be great friends with Kemp since we were around 12 years old. Our mothers would alternate taking us to Southern California Junior Golf Association tournaments. Kemp and I played on the same high school team that won the state title. We both went to USC, where he was a two time All-American. He also has won countless amateur titles, including two USGA Senior Championships. Kemp and his dad are the only father and son combination to have claimed USGA titles.

You don't realize it at the time, but watching players of John Richardson's caliber and playing golf with the quality of junior golfers in southern California, I was surrounded by one of the best environments to nurture a young boy's talents for golf. In the 60's, I played almost every quality golf course in southern California. But playing Pebble Beach, in northern California, was always something special. The rough was always high and the standard of golf had to be exact. The challenge was demanding, but that was what was required. It was very tough, but I never thought it was unfair. If you could hit the shots, which I could, it was the supreme test of where your golf game stood in relationship to the best players in California and the demanding precision of Pebble.

This week the best will play a toughened up Pebble Beach. There will be complaints about the length of the rough, the narrow fairways, and the hard fast greens. I played in similar conditions in the 60's and I didn't hear complaints, other than that the course was a real challenge. It will be fun to watch championship golf on a course that I know really well. I have a good feeling about Tiger Woods this week. I think his mind and body are fully prepared for this challenge.