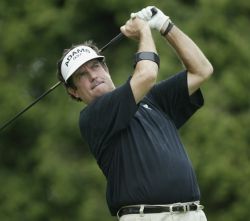 Brain cancer took Bruce Lietzke's life at age 67 almost four months ago. He is remembered as a man that put family and friends ahead of fame on the golf course. He loved to fish, hunt, and had a passion for vintage muscle cars. He lived a full life the way that few were able to achieve. Lighthearted, funny, and laidback are descriptions that describe him, but don't do justice to the man.

Bruce Lietzke, the golfer, had a stellar career. Some would say he under achieved. But he set out to do and accomplished exactly what he intended. He was a steady reliable money winner and won 13 regular PGA Tour events and 7 Senior Champions Tour events. His best finish was a second at the 1991 PGA Championship to John Daley and won the 2003 US Senior Open by two shots over Tom Watson. His goal was to be the breadwinner and earn enough money so he could spend quality time with his family. He would start his season in January and play into May. He then would take the summer off and spend it with his wife and kids. He would return to the Tour in the fall when his children were back in school. As soon as the last tournament was over, he was back to his ranch in north Texas and his family. I'm sure that he loved the game, but it wasn't the all consuming passion in his life. His game was good enough to earn him a great living and afford him to own a 600 acre ranch in Texas. In his mind, what more could he want?

Bruce Lietzke might be best known for the famous banana peel story. The story is true. Bruce was a notorious non-practicer. Playing in the Wednesday Pro-Am was enough of a practice to get ready for a tournament. When he left the Tour and went back home, he said he didn't pick up a club for three months. His caddy didn't believe him, so he put a banana peel under the headcover of his driver. In January, the caddy found a smelly dried up banana peel in the same position he left it three months earlier. With no practice or golf during that layoff, he started off as if he had been playing every day for those months. That is definitely the exception to the rule, but Bruce could do it, so why change?

Bruce's swing was not a textbook motion. He came "over the top" and sliced every drive and iron shot. As an amateur he tried to correct the slice, but soon realized he was very consistent hitting the slice. Being 6'2" and strong, his 10 to 15 yard slice driver was not giving up valuable yards off the tee. Also because he did the same swing and same shot each time, he was one of the most consistent accurate long drivers on the Tour. Because he was so one dimensional, it restricted his ability to compete on certain golf courses and many major championship course setups. It wasn't that he couldn't manufacture a hook shot, but he didn't feel it necessary to accomplish his main task. He is quoted as saying. "It's human nature to want to be better. I don't want to be better. I want to be exactly like I was yesterday." My swing hasn't changed that much in thirty to forty years. Length of the swing is shorter and flexibility is not the same, but the basics are the same. When I practice, I try to do what I have always done, because it has been successful and I have a proven track record. Do I want to get better? Yes, of course, but I want to be better, by being more consistent. I don't and few have the ability of a Bruce Lietzke to take off three months and comeback and be in peak form. What we should learn from Bruce is to stick with what works. If you are happy with the results, don't change. If you are constantly changing your swing, grip, clubs, etc., you will never have consistency. Find what works and work to make it more consistent. You will be a happier golfer.

Because Bruce didn't play tournament golf in the summer, he didn't play in many US Opens or British Opens. His major wins were those summers on the ranch and vacations with the family during that time. He won his own majors many times over.