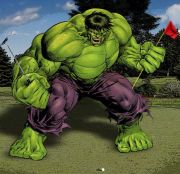 I coined the phrase NASCAR golf to describe the "hit it as far as possible tactic" that the younger players on the PGA Tour have adopted. The "Peddle to the Metal" mentality has produced some outstanding performances when all systems are on "Go". However, it also has not been a reliable format to produce consistent high finishes. Rory McIlroy, Brooks Koepka, Dustin Johnson, Jason Day, and Justin Thomas have had great success using this aggressive method, but none have yet reached the level of consistency that Tiger Woods attained in his prime. Now enters Bryson DeChambeau with a new dynamic; Hulk Golf!

Bryson DeChambeau has introduced a component to the game that few thought possible, bringing over-powering brute strength to a game that usually requires delicate precise movements. To accomplish this, Bryson has transformed his body into a golfer's version of "The Hulk". Since last year, he has gained 40 pounds and added a lot of muscle. He accomplished this while not giving up flexibility, which is the key ingredient to clubhead speed and distance. He has been the talk of the PGA Tour these past four weeks. He has had chances to win twice and has not finished out of the top 8, since the Tour restarted.

What is so remarkable is that Bryson has added up to 50 yards in distance while not sacrificing accuracy. Bryson is, at times, swinging 100% and falling off-balance, but the ball is still going relatively straight. When I have watched the National Long Driving Contest, the contestants rarely hit more that 2 or 3 drives out of 10 into the outlined fairway. When Bryson readies himself for a massive hit, he prepares like a weightlifter before they lift a record weight. He builds speed on his practice swings, then approaches the ball with intensity and sets himself and takes a deep breath which he holds while swinging. The follow through is a total release of what energy he has mustered. No one comes close to his effort!

Bryson has totally committed to this approach. He drinks 4 to 6 protein shakes a day along with a big breakfast of 4 eggs and five slices of bacon and dinner with a large steak and potatoes. He works out three times a day. The question is, can this be a healthy approach for his long term health and is it sustainable? It certainly worked in his impressive win at the Rocket Mortgage Classic in Detroit this past weekend, but can he continue on this pace?

I have to admit, he has been very fun to watch. It's fascinating. Can he keep it up? In the short term the answer is yes. Can he get better? Absolutely, he must learn to regulate his distance control with his irons. I'm guessing this is getting used to his new body and added power. It could also be an equipment issue. He has blown short iron shots over greens that cost him win opportunities twice in the last four weeks. Even with his win this week, his wedge game from 100 to 125 yards was well below average for a PGA Tour professional. Will he figure it out? He certainly has the intelligence and determination to work it out. He has shown that his touch around the greens is more than adequate, so he should be able to dial in the distance control with the mid-length wedges. There is no reason that he shouldn't improve on the few weak points in his game.

Right now he should be the favorite for any of the major championships. His awesome length has given him a big advantage and he is willing to take advantage of it. Welcome to Hulk golf!